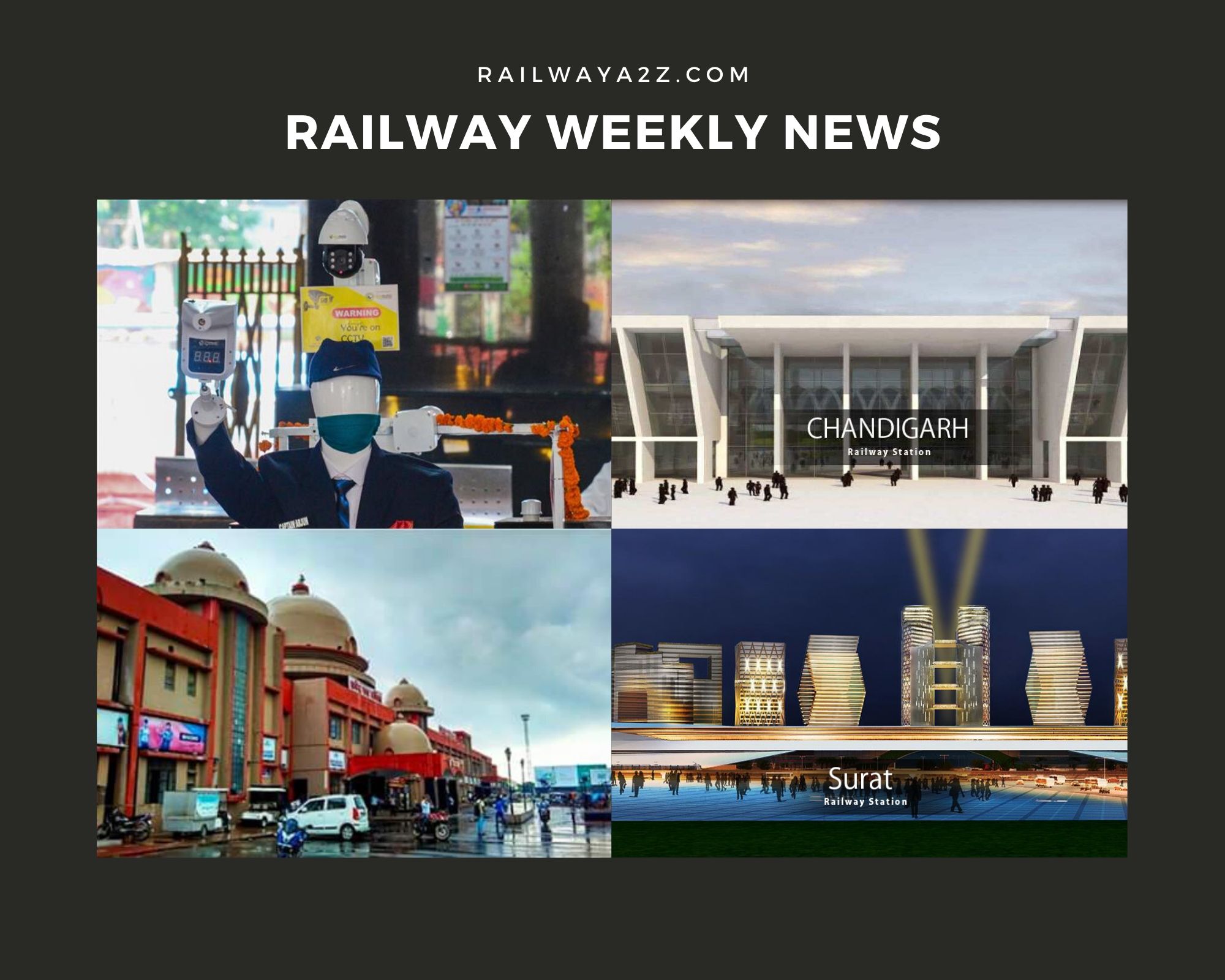 The cameras track for any anti-social activity in plate form areas and the thermal screening machine scans the temperature of passengers. In case of high temperature, it sounds an alarm.

Captain ARJUN will go a long way in the history of railways as an innovative initiative.

IRSDC is a joint venture company of RLDA and IRCON, the two railway PSU’s.  In the first phase, railway stations at Habibganj and Gandhi Nagar will be completed by December 2020.

The renovated station will have also boast world-class interiors along with gaming and museum zones.

For Gwalior, Amritsar, Nagpur, and Sabarmati stations, IRSDC has started the tendering process and likely to be completed by August 2020. These stations are being developed on the PPP model i.e Public-Private Partnership.

Rajendra Nagar Railway station in Danapur division of East Central Railway has topped the list of green railway stations in the country.

The railway station is equipped with the best in class water harvesting facility and declared as the best green station in overall category.

Dedicated Freight Corridor Corporation of India Ltd. (DFCCIL), a special purpose vehicle under the Railway Ministry, decided to terminate the ₹471 crore signalling contract given to a Chinese firm.

The contract for ‘signaling and telecommunication work’ for the 417 km section from Kanpur to Mughalsarai on Eastern Dedicated Freight Corridor was awarded to Beijing National Railway Research & Design Institute of Signal & Communication Group in 2016.

As per the Indian Railways, despite passage of four years, only 20% of the work has been completed. 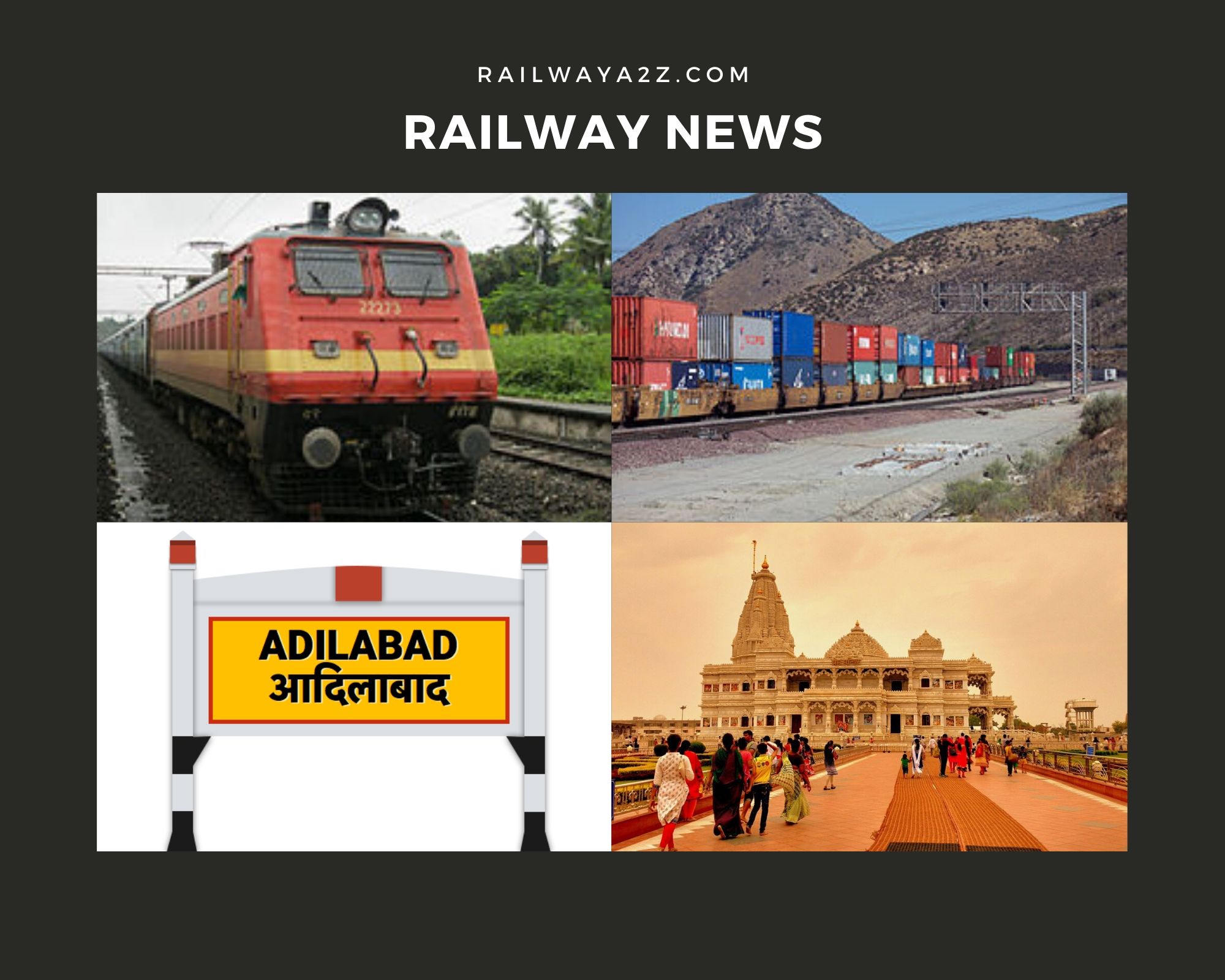 The western railway successfully tested the double-decker trains on electrified sections. The height of the overhead equipment (OHE) was increased to 7.57m to accommodate the double-decker.

The double-deckers carry extra luggage and thus will increase the revenue of railways with slight modification in assets.

The successful trial was conducted between Palanpur and Botad stations in Gujrat.

Rail Land Development Authority (RLDA), which is a statutory Authority under the Railway Ministry has been entrusted with responsibility to study mass-transit system between Mathura and Vrindavan.

The distance between Mathura and Vrindavan is 12 Km and there is a mass movement of people because of religious aspects.

The section Adilabad-Mudkhed lies in Nanded Division of South central Railways. This will be important project as the central railways portion between Majri and Pimpalkutti stations is already electrified section.

The Ex-Prime Minister Shri Atal Bihari Vajpayee had laid the foundation stone for a mega rail bridge on river Kosi at Nirmali in North Bihar on June 6, 2003.

The two-kilometre long rail bridge on Kosi river will link Nirmali with Saraigarh. Located in district Supaul in North Bihar, it will connect Nirmali, which is presently a terminus station of Darbhanga-Sakri-Jhanjharpur-Nirmali Metre gauge section, with Saraigarh station of Saharsa-Forbisganj Metre gauge route to provide through a link to Northeast Frontier Railway.

The bridge will enable the opening up of the route through Darbhanga, Nirmali and finally to New Jalpaiguri from where the route to Assam starts. 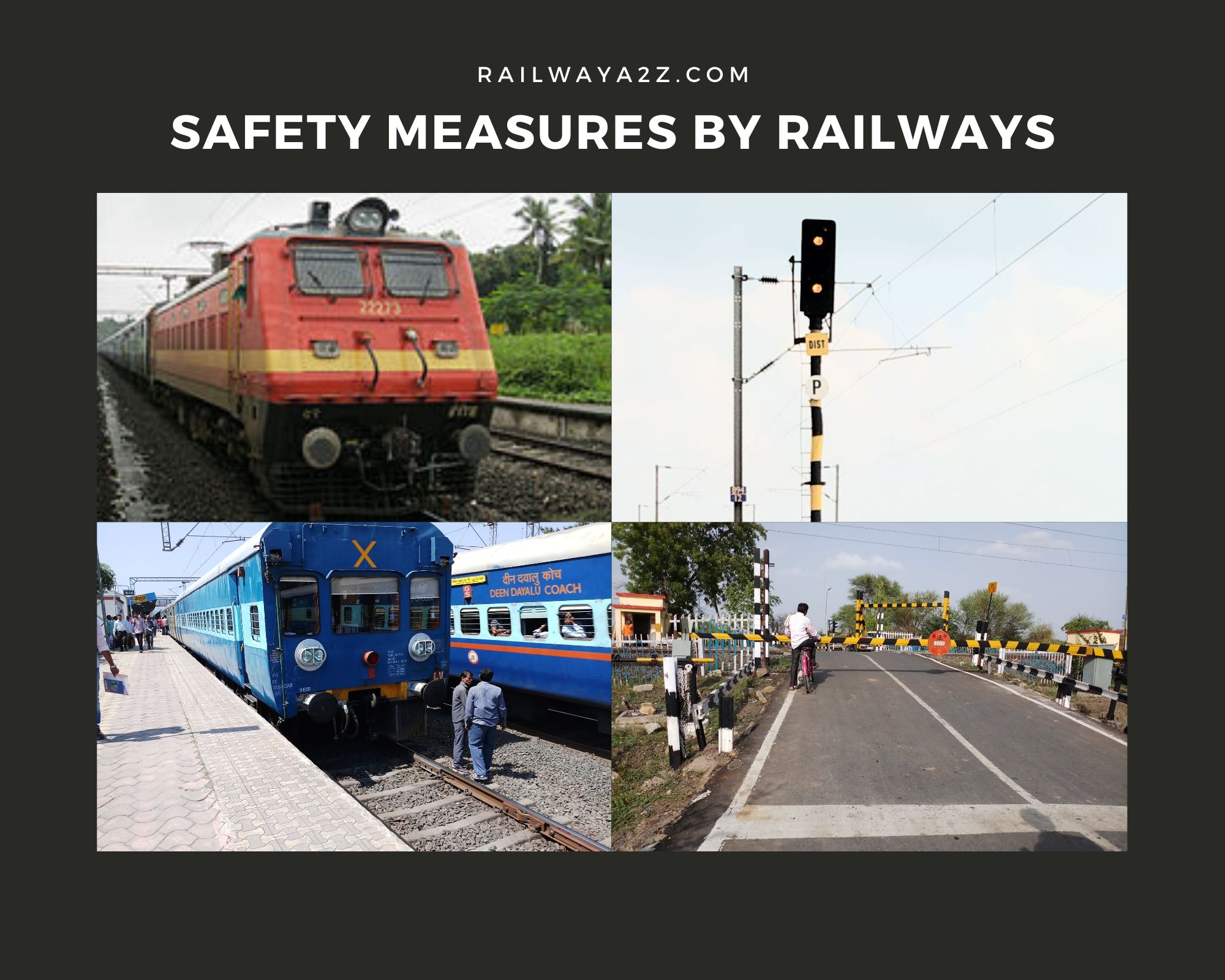 Railways has registered the best ever safety record during April, 2019 to March this year. Railways Ministry has said that there has been no fatality of any railway passenger in any train accident. This remarkable feat has been achieved for the first time in the year 2019-2020 since the introduction of the Railway System in the country 166 years ago.

The Ministry said, the zero passenger fatalities in the last 15 months is a result of continuous efforts by the Railways to improve safety on all fronts. Railway has undertaken several measures to improve the safety, including the elimination of manned level crossings, construction of Road over Bridges, highest ever renewal of rail tracks, effective track maintenance and improvements in the signaling system.

The various excellent activities carried out in the year 2019-20 are summarized below:-

The above steps have considerably improved the safety of passenger movement in trains. Good works must be ensured in future in future too as there are many such activities to be carried out. As the country is facing an unprecedented situation of the pandemic, there could arise a deficit of funds which needs to be closely monitored.

Indian Railway has installed bio-toilets in 68000 coaches till now. This is being carried out under Swatchh Bharat Mission. In 2019-20 alone, 49487 coaches were installed in 14916 coaches.

Also Mechanized cleaning is being carried out at 953 railways stations over the entire Indian Railways.

The Tiruchirapalli Railway Junction has been awarded Green Railway Station Certification with ‘Gold’ rating by the Confederation of Indian Industry.

The Environment Directorate of Indian Railways with the support of the Indian Green Building Council has developed the Green Railway Stations rating system.

Karnataka’s Hubli railway station is set to get the world’s longest railway platform with dimensions of 1,400 metres length and 10 metres width. Th work for the extension of platform number 1 of the Hubballi Junction is underway.

While the existing platform is 550-metres long, it will be extended to 1,400 metres in a year. The work is being carried out as a yard remodeling work.

Hubli is the Headquarter of South Western Railways. It has three division as Hubli, Bangaluru and Mysore.

The trains will run at a speed of 200KMPH in the starting phase and 250KMPH in the future. The details of the project are tabulated below.

Indian Railways is the lifeline of our nation. The Covid-19 pandemic has made us realize this proverb again.

The national transporter worked tirelessly during lockdown so that the essential commodities as food grains, milk, vegetables reach every household. Not only this, the power requirements of coal, oil were met during lockdown.

The Indian Railways and fraternity of workforce deserve a great applause for such marvelous feet under strenuous situations.

The plight of migrant labourers was well taken care of by the national transporter. It has run almost 4000 trains and transported nearly 60 lakhs migrants from one state to another.

This was carried out by fulfilling all the precautions and nitty-gritty of social distancing and norms of the pandemic.

Now that the lockdown has been lifted and limited to containment zones only, the great Indian Railways has started unlocking. From 12th May, it was running 15 pairs of Rajdhani special trains and from 1st June, 200 trains have started running.

It was such meticulous planning that unlocking was carried out in a phased manner.

Now the Chairman Railway board has confirmed that Satabdi trains will also start running.

In total, the unlocking of this country has been well taken care of by Indian Railways and its entire fleet of employees and officers deserve applause.

Though they have faced hardships in the form of railwaymen catching the virus. However, this didn’t deter them from delivering their duties. We should all pay tribute to Indian Railways and its railwaymen. Long live Indian Railways

Trail run of WAG 12B IGBT based, 3 phase drive, 9000 KW electric locomotive with power of 12000 HP and capable of carrying 6000 T load was conducted from Pt Deen Dayal Upadhayay Jn to Barwadih via Dehri-on-Son on 19th May 2020.

The various features and details of this Trail run is mentioned below.

It is expected to provide a much-needed breakthrough for railways in running long haul trains. Also, it will reduce congestion and enhance efficiency in the movement of goods traffic in the country.

Do you want to know about Group-A officers of Railways?

The group-A officers of Railways run the entire machinery right from train running to policy formulation to technical stuffs to revenue collections. They form the backbone of this grand old organisation.

These Group-A officers are recruited by the highest recruitment body i.e UPSC, Union Public Service Commission. However, as the requirements of railways consist of technical, non-technical and medical oriented, these group-A officers join through three different exams into railways.

The technical officers join through Engineering Services Exam conducted by UPSC every year and officers join in various technical departments of Railways as Engineering, Electrical, Mechanical, Signal & Telecom and stores. Civil engineering in railways is called the engineering department. The Electronics and Telecom guys manage the Signal and Telecom department of railways. The electrical department is managed by electrical officers and Mechanical officers look after the Carriage & Wagons department. The stores department directly related to the procurement of various materials required for day to day requirements are headed by stores officers who join from various engineering disciplines.The railway services are mostly preferred by the officers through the Engineering Services Exam. http://www.indianrailways.gov.in/railwayboard/view_section.jsp?lang=0&id=0,1,304,366,530

The various service names of these Technical Group-A services are as under:-

The non- technical officers join through the Civil Services conducted by UPSC every year that recruits officers in IAS, IPS, IFS, IRS, other departments as well as railway departments. As per choice options in civil services in civil services exam 2018, the railway services were opted from 277th rank candidates out of 759 candidates.https://cseplus.nic.in/Home/ServiceAllocation.

These officers are as below:-

Indian Railway Health Services (IRHS)- They are recruited through combined medical services conducted by UPSC every year.  The IRHS services were earlier called as IRMS i.e Indian railway Medical Services. However, after the merger of 8 Group-A services into IRMS i.e Indian Railway Management services, the name has been changed to IRHS.

Railways IRHS is also favourite among the doctors of Combined medical services. You can check the allocation through this link.

The Group-A officers in Railways work in close coordination for the development of Indian Railways as a whole. The Indian Railways will always prosper if young minds join through the prestigious exams conducted by UPSC.

A) Technical Departments are further divided as follows:-

The various Technical departments are as:-

Operating department– the operating department is responsible for the punctual running of trains. It has station masters at stations and controllers in the control room to manage the train running. As railway earns mostly from goods trains, they also manage the running of goods trains. Also, they coordinate with various railway sidings for increasing railway revenue.

Commercial department-  It is revenue collection department of Indian railways. They have TTE, booking clerk, reservation clerks under them. They also coordinate with advertisers and bring revenue to the railway. Recently many trains were branded by various companies these are carried out by the commercial department.

Personal department- They look after the staff issues. They are responsible for transfer posting, interaction with trade unions, salary prepration of staffs, leave and encsasgments, Pass/PTO. They have a major role of keeping the entire huge workforce of railways together.

Accounts department- It is a small department but does most of the important functions. They are responsible for the passing of bills, salaries, maintaining railway books, calculating profit and loss and ensuring undue expenses in railways are avoided.

Railway Protection Force- It is a police force of Indian Railways. They are responsible for protecting the stations against all security issues. They check the unauthorized vendors, travellers etc. They also coordinate with state police for maintaining peace and harmony at railway premises.

C) MEDICAL DEPARTMENT- The medical department consists of railway hospitals and other subunits for providing medical facilities to the railway’s large workforce. They carry out the following functions:-

The above departments work in close coordination for the development of railways in particular and our great country in general. We should be fell proud to have such a grand old organization with so many departments and sub-departments working amicably and being a lifeline of our nation.